A special dock design increases the capabilities and usefulness of Apple’s highly successful iPad
When Apple released the iPad in April of 2010 it created a new category of products and created new opportunities for accessories. The iPad combined the ability to wirelessly connect to the internet, surf the web, listen to music, watch movies, use thousands of downloadable applications and read books in a very portable device with excellent battery life. Its very flexibility and power made it nearly perfect for many applications but few accessories to support these uses were available at launch time.
Within 80 days of its release over 3 million units were sold. It is estimated that in 2010, over 14 million units of the device were sold. These devices sell around the world in many different countries and languages.
Apple’s near legendary corporate secrecy meant that when the iPad was launched very few accessories were available. Apple itself was unable to release all of their accessories at launch time and had to phase them in over the next few months. The iPad uses the same 30-pin dock connector but the physical size difference meant that many accessories had to be redesigned for use with the iPad. 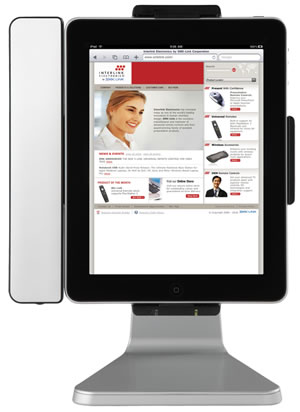 【Photo 1】PadDock 10
（iPad portrait position）
One of the unique features of the iPad over the iPhone and iPod touch was the ability to use an external keyboard. Apple released a combination keyboard and dock which held the iPad in the portrait position for typing notes. While this presented the user with a paper sized view, most users are used to the landscape display of a computer. The iPad also works with standard Bluetooth keyboards, but no dock held the iPad in the landscape orientation.
While there are numerous docks for the many models of iPod and iPhone that are optimized for playing music, SMK realized that the iPad required a different solution. As a more computer like device, the iPad needed a dock that had more abilities than just being a speaker system.
One of the many reasons for the success of the Apple products is their integration of the 30-pin dock connector. Apple licenses this connector to vendors to provide a seamless way to control Apple products directly from their products. By having an ecosystem of products which support the various models of iPod, iPhone and iPad, users can pick whichever product fulfills their needs. SMK-Link is a licensee of the Apple 30-pin connector.
In September of 2010, SMK-Link introduced the PadDock 10 speaker stand and syncing dock that is Mad for iPad. The key consideration was to design a product that had a striking Industrial Design, excellent Speaker Design and unique Syncing and Charging capabilities. 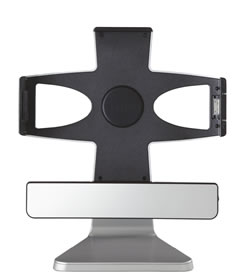 The PadDock 10 was designed in the SMK-Link facility in Camarillo, California. The design of the PadDock 10 was chosen to complement its usage as a mini computer. The look and feel was designed to complement the Apple look and feel. Apple design aesthetics includes the use of aluminum and glass. The iPad itself is a large glass screen atop a solid aluminum back.
Using the iPad itself is the core of the design, the PadDock 10 expands on that same aesthetic with the addition of a speaker below the screen and a foot. The speaker itself has an aluminum plate on the front that matches the iMac and the color of the unit is matched to the iPad.(Photo2, 3) 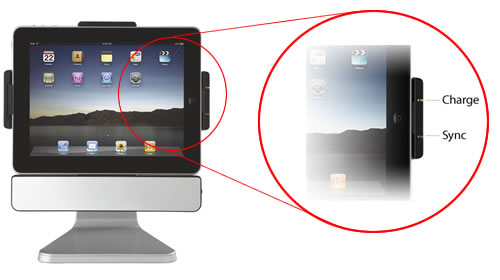 【Photo 3】PadDock 10(iPad landscape position and display section)
Beyond the shape and color, the ability to rotate between portrait and landscape modes was a critical consideration. When watching movies, a landscape orientation is preferred, yet some iOS programs only operate in the portrait mode. A circular hub on the back of the cradle allows the screen to rotate 360 degrees with stops every 90 degrees. The screen also can tilt up and down to get the best viewing angle.(Photo 4) 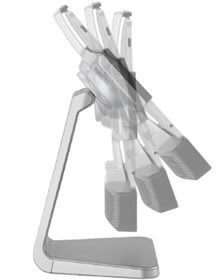 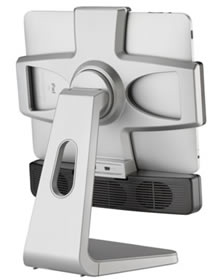 Both sound quality and achieving a seamless look was important in the design of the speakers. Because of the screen size and the touch interface, the typical user sits within arms length of the iPad when watching movies and listening to music. Typical speaker docks have the speakers facing towards the listener. But because the user is sitting close, the stereo separation suffers on conventional design. The speakers on the PadDock 10 were designed to face away from the user and bounce sound off the wall behind the unit. That greatly increases stereo separation.(Photo 5)
PadDock 10 uses custom-designed oval (40 mm x 55 mm) speakers with high-energy neodymium magnets for room filling sound. A unique passive radiator extends the bass frequency for a natural full range sound quality.

While the standard USB port on a computer has plenty of power to recharge an iPod or iPhone, the iPad has a much larger battery and requires more current to charge quickly. Charging the iPad can take over 7 hours using a USB port. Apple ships a 10 watt power block for charging the iPad. Using Apples power adapter this time is reduced by 50%.
When attached to a computer, music, movies, applications and documents can be synced to the iPad. But when attached to the computer, the iPad doesn’t charge while the screen is turned on and charges very slowly when turned off. Using the Apple power supply, the iPad charges quickly but files cannot be synced to the iPad.
To solve this problem the PadDock 10 was designed to switch between two modes. In Listen mode, the Apple power supply provides 10 watts of power to be used between the speakers and charging the iPad. In Sync mode, the iPad is directly connected to the computers USB port for syncing.(fig.1）
A simple mechanical switch drives an electronic USB switch to change between modes. A USB to USB Mini connects the PadDock 10 to the computer for sync purposes. A special USB to power pin provides power to the dock. Different connectors are provided to prevent customer confusion.
Even for people who will rarely use their iPad in a dock, PadDock 10 is still an excellent solution to everyday problems. First, the cradle gives the user a place to hold the iPad safely and securely when not in use. Second, because it uses the user’s own Apple power supply, it supports the fastest charging mode possible. Third, PadDock 10 is the only dock that supports Syncing while in the dock.
【Fig.1】 Block diagram of PadDock 10 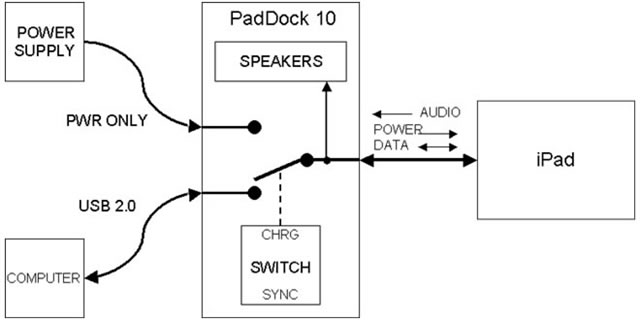 Using with a Bluetooth® Keyboard

Using the iPad with a Bluetooth keyboard and the PadDock 10 expands the functionality and usefulness of the iPad. In fact the ability of the iPad to boot nearly instantly and to connect wirelessly makes it ideal for surfing the Internet with the PadDock 10. Email is another area where the addition of the keyboard and a rotating dock allows for improved productivity and ease-of-use.

Originally the PadDock 10 was targeted at young adults from 16 to 30 for use at desks, in dorm rooms or apartments. In these environments, the iPad can be used as a video station, game station or Internet station. Since being released, the unique features have included the usage model dramatically. With a full web browser and wireless capabilities, offices are using the iPad to increase productivity from filling forms to controlling equipment. Uses now includes everything from reading recipes while cooking in the kitchen to use in the office to complete an employees daily work.

Both SMK-Link and SMK are promoting the PadDock 10 speaker system for iPad. SMK-Link licenses the 30-pin connector from Apple and will continue to develop innovative products for this and future versions of the Apple iPad.

Written by SMK-Link Electronics Corp.
This article was published in Dempa Publications in Japan in Japanese. (May 19, 2011)
To top of page