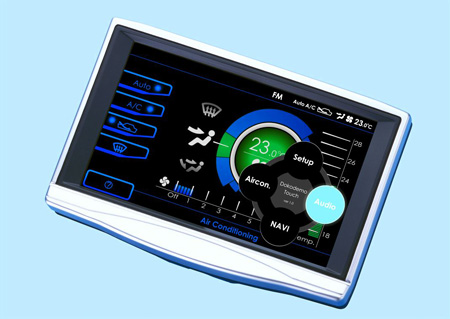 We are pleased to announce the development and commencement of marketing of resistance-sensing 2 step force feedback touch panel.

We have previously produced force feedback touch panels, and have received high reputation from the market as products which directly transmit various touch feelings to the fingertips.

We have newly developed a 2 step sensing technology which can operate the buttons with different objectives by changing the inputting force at the same position in the first step and the second step.

In order to take further advantage of this feature, we have prepared an application called the “Dokodemo Touch” which displays a screen switching button when a random place on the screen is lightly inputted.

The “Dokodemo Touch” is an application that allows the user to switch to a different screen by touching any place on the screen in order to display the screen switching button, and the screen can be switched by moving the user’s fingers in every 4 direction to display the menu screen (in the case of 4 screen).  This operation is also possible on a fixed button already on the screen and the buttons must be strongly inputted in the case of operating the fixed button.  In the previous touch panels, the user had to look at the buttons to operate; however, by this technology, blind touch inputting has become easy.

Furthermore, by combining the 2 step input and the force feed touch panel, it is possible to assign different touch feelings to the first step and the second step and it is possible to make blind touching more easy to operate by making the buttons multifunctional.

By introducing this 2 step force feedback touch panel to the market, we are hoping that this will become the input device with a more easy to use machine interface function.

This new product is planned to produce 100,000 units per month in the Philippine Factory.

Furthermore, this product will be exhibited at the “FPD International 2009”, a comprehensive exhibition for flat panel displays, manufacturing equipment, components and material which starts from October 28, 2009 and we will continue on with active marketing activities.