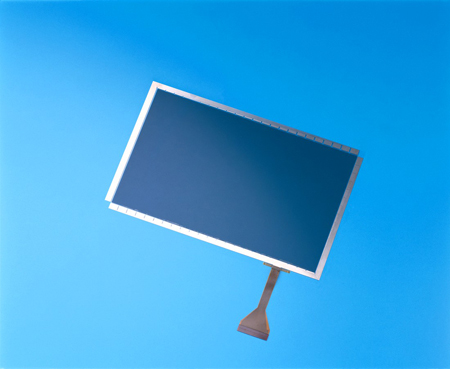 We are pleased to announce that we have developed and started taking orders for an automotive capacitive touch panel.
We have been selling compact size capacitive touch panels for application in mobile equipment over the last two years, and these have gained high praise from the market for their use mainly in mobile phones.
In recent years, there has been demand for multi-touch operation, a light operating feel and full-flat structures when it comes to touch panels used for vehicles such as car navigation systems and central control .
To respond to such needs, we have developed an “automotive capacitive touch panel”.
This touch panel allows a number of easy operations such as multi-touch input to expand or shrink maps, a flick input method for scrolling through maps, and a drag-and-drop function to make destination settings.
In response to increasing demands for a stylish external design, this product can achieve a uniform full-flat structure that is completely level with the screen housing by attaching a design film to the surface of the touch panel.
In addition, it is demanded that standard automotive touch panels have high heat resistance so it is necessary for products to clear an operating temperature of -30℃ to +85℃ and a storage temperature of -40℃ to +95℃. Making use of experience producing resistance sensitive touch panels for automotive use gained over more than 10 years, we pioneered the use of capacitive touch panels and created a model able to clear specifications for automotive use.
Further, similar to car navigation equipment, demand has increased for low reflectance touch panels for prevention of image reflection on the panel surface under direct sunlight and for improved visibility of images on display screens. In response to demands for such low reflectance displays, we have managed to keep reflectance as low as 1.5% thanks to our optical techniques acquired during the production of resistance sensitive touch panels.
The touch panel size is compatible with the standard automotive display size of 6.1 to 8 inches.