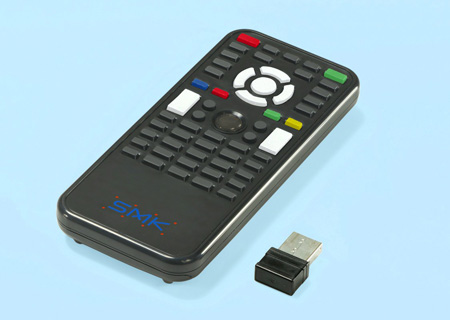 We are pleased to announce the development of a remote control and receiver loaded with our RF module containing a built-in 2.4GHz band antenna compatible with ZigBee®RF4CE1 especially suited to remote control use.
In recent years, it has been a requirement for AV equipment remote controls to be capable of controlling multiple devices with one remote control and to be able to adjust to various input scenes.
In response to such needs, we have developed a standard remote control loaded with an "RF module containing a built-in 2.4GHz band antenna" and a small-size receiver to be used with this equipment. The communication system adopts the ZigBee®RF4CE platform which is currently growing in popularity. It enables N-to-N high reliability two-way communication, low power consumption, coexistence with other 2.4GHz band RF, and security settings.
This new remote control features two-way communication and network functions by using radio frequencies, enabling more convenient and easier operation. The receiver's small size also contributes to the increased space-saving capacity of this equipment.
Our repertoire of RF remote controls includes this RF remote control and receiver in addition to previously developed RF modules, and we intend to further expand our remote control operations through the increased expansion of our product lineup.

Terms
1: RF4CE
Radio Frequency for Consumer Electronics
2: FCC
Federal Communications Commission (US)
3: CE
Derived from Latin-based EU languages.
In the case of French, it corresponds to the initial letters of Communauté Européenne.