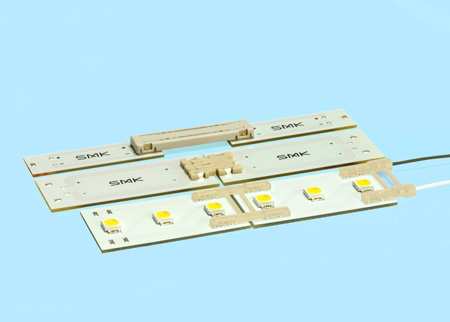 align left>We are pleased to announce that we have developed a series of connectors for LED lighting.
Safety and heat resistance were fully taken into account when designing this product. The design complies with IEC standards and the Electrical Appliance and Material Safety Law, and creepage distance and spatial distance have been secured.
The product lineup consists of a total of five models. This includes three models for base and line lighting and two models for LED lamps.

Three models for base and line lighting
LT-1 Series:  Horizontal type connector that is horizontally mated on LED mounting boards.
LT-2 Series:  Bridge type board to board connector for LED boards fixed to a frame.
LT-3 Series:  This connector is structured for easy alignment using a smaller LED pitch than the LT-2 Series.
This product emphasizes assembly safety through its anti-electric shock structure.
Three types of plug are available for the above 3 models, consisting of a board to board plug, a power-feed plug, and a short plug, and the standardization of LED mounting boards is enabled through standardized board sockets.

It is believed that demand for LED lighting connectors will rise steeply in the future, so we intend to actively develop our sales operations in this area.
.

There are no photos of the LT-4 and LT-5 Series products.
To top of page