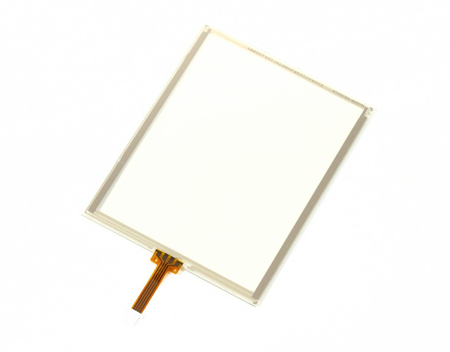 We are pleased to announce that we have developed two types of resistance sensitive touch panels using a transparent conductive film that replaces indium tin oxide (ITO).
Transparent conductive film that uses ITO for upper and lower electrodes is usually used for resistance sensitive touch panels. Because ITO belongs to a rare metal (rare earth), its future availability is a concern due to a multitude of problems such as depleted resources and rising prices. Finding a replacement product has therefore been strongly desired for a while.
Accordingly, together with film manufacturers we have been researching and examining alternative materials. As a result of such study, we have succeeded in the development of a film material for touch panels that uses two types of conductive film: carbon nanotube (CNT) and organic conductive polymer (PEDOT).
Touch panels using these two CNT and PEDOT materials achieve the same performance as existing products with ITO, and input durability is expected to increase severalfold.
In addition, the process of attaching the membrane together with CNT and PEDOT to the film can be done with coating fluid, so this helps to improve productivity and achieve the stable supply of film materials.
In line with the increasing demand for touch panels, we will continue our preparations to mass-produce this product.
This product was exhibited at the flat panel display integrated "FPD International 2011" exhibition which opened on 26th October.