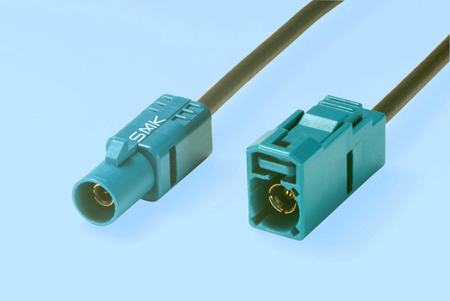 We previously released our "VC Series (plug for PWBs)”, a SMB coaxial connector with a molded locking provision for automotive equipment and this received a favorable response. We have now developed and started sales of our "VC-2 Series" for cable plugs and cable jacks.
Similar to the previous series, the "VC-2 Series" is an SMB (Sub Miniature Type B)-based coaxial connector employing a molded locking system for automotive coaxial connectors. The previous series is used to connect car navigation systems and GPS antennas, TV antennas and radio antennas, or for rear-camera connection. It is employed as the standard choice with European automakers and the market is expanding also in the U.S. By introducing this product, we hope to expand this market further.
We have succeeded in making a smaller product, something strongly desired by the market, and reducing the parts count contributes to improved assembly workability.
The compatible coaxial cable handles the equivalent of 1.5D (outer diameter: φ3.0mm)