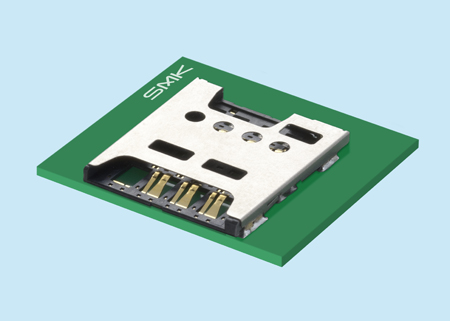 We are pleased to announce that we have developed and released a "micro SIM card connector (push-pull type)" for smartphones, mobile phones, and tablet PCs. Following on from the "micro SIM card connector (push-push type)" we released in September this year (Release No. 935CS), this product expands our lineup of connectors for micro SIM cards.
The SIM card market is gradually shifting to smaller micro SIM cards and even larger demand is expected in the future.
To meet demands for increasingly compact and thin devices such as smartphones and tablet PCs, this product uses an integral molding structure made possible by our technical know-how, and achieves the industry's lowest profile with a mounting height of 1.3mm.
The terminal contact has an independent double-point contact structure that is simple and reduces the area occupied by the PWB.
An easy-to-use push (lock) and pull (eject) system is used for card insertion/extraction. Two models are available including one with and one without a card detection switch.